That’s being said google never informs about the upcoming broad core algorithmic update which is about to happen however this is the second time in a row Danny Sullivan (Twitter Handle @searchliaison) mentioned in a tweet that they released a broad core algorithm update yesterday on 24th September 2019. 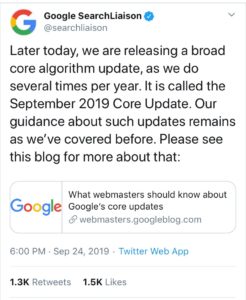 Danny named it “September 2019 Core Update” where as usual they never mentioned clearly what is about to change in this update.

As per Danny the core update will begin within hours and will take a few days to complete successfully. 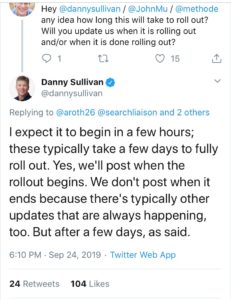 As Google never say this in advance but this is the second time in a row they clearly stated about their plans.

Well, what is going to change is still a mystery to all as these are few things to take in action to safeguard your sites.

What do you suggest on this September 2019 Core update? What did your study say?

Tell us in Comments Section Below!